All audible and inaudible sounds in the universe are an inspiration for my music, such as physical movement, art, architecture, good food, electronics, quantum physics and nature.

My focus is on experimental, improvisational and contemporary music. I’ve been a member of groups like The Electric Aardvark, where we worked a lot with electronics, or Field of Ears, where filmmakers are involved.

2020 Le UN, improvisation company. Each of us is committed to artistic achievement as much as to the social, non-hierarchical organization of the whole. Le UN brings together 21 musicians, 2 filmmakers and 1 light artist, 1 performer, depending on the context. It is the individual and her/his practice that are at the centre of this orchestral experimentation and not her/his dilution in the collective. It is important for us to preserve our singularity within a protean mass without obstructing the collective space. Le UN improvises (Nodal Unit), invents play devices (Espace tendu, Mottes), works with the cinematographic image (Unkino), and is based in Bordeaux.

2019 Dromedary, a duo with Trombone player and composer Hilary Jeffery. Having worked together for more than 12 years in many projects, Hilary and I formed Dromedary in November 2019 to play improvised modal music. Key themes for our work include consciousness, inner-space, tuning, expanded listening, presence and multi-dimensionality.

Since 2008 I am part of the pool of musicians of Lysn, a band formed and led by trombonist Hilary Jeffery. The band has a variable line-up, he describes the music as "improvised drone-jazz for inner/outer space”. 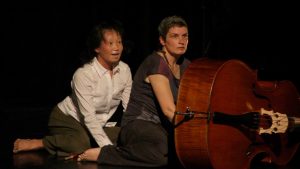 2002 to 2005 member of punk/rock/impro band The Ex with tours through Europe, USA, Canada and Ethiopia.

1997 to 2019 member of the Nieuw Ensemble with tours through China, Korea, USA and Europe. New Chinese music is this ensemble’s specialty. 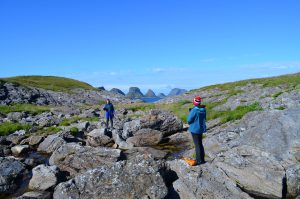 I have worked in many orchestras and ensembles for contemporary music, such as the Royal Concertgebouw Orchestra, the Rotterdam Philharmonic Orchestra, the Radio Chamber Orchestra, Asko/Schönberg Ensemble.